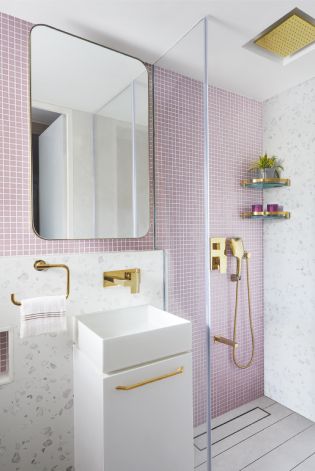 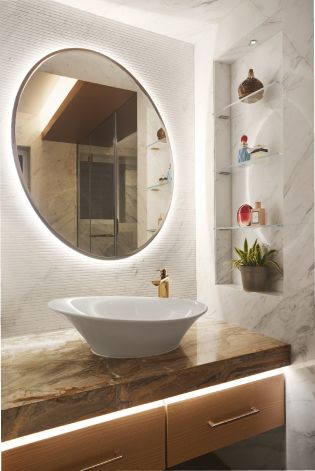 Have you ever considered using shades of gold and other metallised colours in the bathroom? Or have you shied away from them? Architect and interior designer Anushka Shetty shows us how to incorporate metallic accents to create chic and trendy spaces…

For its ability to make a rather small space appear much larger by the light it reflects, we chose the luxurious Bianco Oro marble. A hand-cut black Marquina inlay pattern on the floor gave the space layers and dimension, with the brushed bronze fittings adding a timeless elegance. The mirrored medicine cabinet works perfectly in this compact washroom to double up the space via reflection. The most striking feature is the custom-made brushed bronze aluminium partition that separates the wet and dry areas, substituting a typical shower cubicle.

As this was designed for a teenager, it meant that in this space we kept the aesthetics "on point".  We wanted to achieve a sense of delicateness which was done by using smaller-sized mosaic tiles in a dusty rose shade, with the dramatically large terrazzo chip panels balancing them. The edges of the mirror have been softened to keep in tune with the light and airy look. The gold fittings and accessories act almost like ornaments in this dainty, feminine bathroom.

The idea for this space was to mimic the shape of the Kohler veil washbasin in the oval mirror and to create bold forms by skewing the basin at an angle to generate drama. The Roso Orobico marble used for the vanity counter in conjunction with the Bianco Oro marble made the rose gold fittings blend with the design seamlessly.

Metal It Up: 4 Tips To Add Shine To Your Space

“Since the inception of the practice in 2017, our design philosophy has always been to avoid visual clutter and over-complicated detailing. We like to practice restraint while designing and only have a few master-strokes that speak volumes, to eventually result in understated elegance and timeless spaces.”